A lot of stuff going on at Swart Amplifier Co. these days, from new dealers turning to Swart in Portland, OR and San Diego, CA, to musicians writing in with unbridled praise.

You know, we're still amazed by some of the reactions from musicians and players after some time with Swart Amps. Take the first two mails below, these rolling in last week. I have to admit, even I was a bit sheepish after reading these... I'm starting to wonder what's in the water up in Ottawa and how much are tickets... Thanks, Mike. Now I'm wanting that Theremin! And a big thanks to Eric Casey for his Swart AST/ST-6V6se observations, including the plug for the NOS 5Y3 in the AST - We totally agree. Well-said, Eric.  kh ~ Swart Online

And the latest from Swart Players via the Mail Bag... 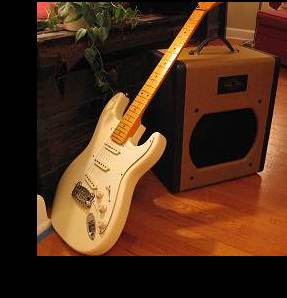 I've spoken to you on the phone a couple of times and emailed you once or twice as well - thanks so much for being so responsive and helpful! Amazing to me that I can be in contact with the man who designs and builds these, before I had even become a customer. I love products that are hand-made with pride, and you obviously have a lot of pride in your work.

I'm in absolute tone heaven right now. I didn't want to write that, it sounds like such a cliche, but its the only way to put it.

My AST arrived on Thursday, (courtesy of Boutique Tone in Montreal - Jeremy gives EXCEPTIONAL service by the way, and is obviously VERY excited about your amp). It was built on January 8th, and you drew a great little martini glass inside on the tube chart sticker! I love it!

MAN, I simply cannot tell you how great this amp makes me feel. Its everything I've sought in tone and feel since I started playing guitar so many years ago. It simply doesn't get any better than this. Somehow you've found the magic formula with this amp - I've played more amps than I can count, literally. Vintage, modern, reissue, boutique. I've never, ever played something like the AST. You've beat the masters and the legends. Your name will be added to theirs in the annals of amp history, I am certain. 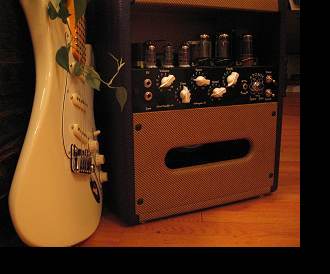 And its not just me - two good friends, both experienced players, one a pro, knew I was getting this amp. They seemed subdued. Not overly excited. They kept sending me links to Victoria and other similar amps.

Anyway, they both have been by to hear the Swart in the last two days. I needed to help them pick their jaws off the floor. I'm not shitting you.

They both said - and I swear, 'That is, bar none, the finest sounding amp I have ever heard in my life. No doubt about it.'

I think I sorta know my stuff - these guys, without question, DO. I wasn't looking for their approval, as I already knew this was the one and only amp for me - but is was so cool to see these cats totally have their expectations blown away. I think you may be selling a few more amps up north, my friend!

Anyway, just wanted to write to say that its here, and its more than I remembered or expected it to be. I spent a few hours with one about 4 months ago, which convinced me my search for the perfect amp was over.

Now that my own AST is here, its doesn't even compare to the memory - its so much more.

I was actually scared and nervous when I first plugged it in. Not sure why - I've never spent this much money on a single piece if gear before, and while I had played an AST, it was not with my own guitar. Loads of anticipation as I flipped that 'launch' switch for the first time....... 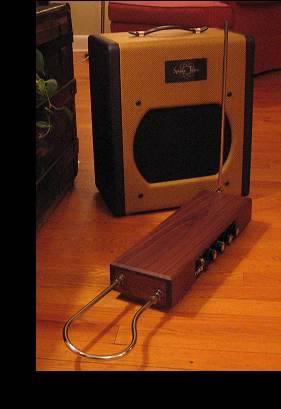 Well, my fears - they didn't crumble or disintegrate, no. Instead they immediately, and beautifully and gracefully, MELTED away, soaked in the most warm, thick, soulful vibe that has ever, EVER, filled my studio. Simply astounding and unmistakable. I knew immediately. With the attack of the very first note. Can you say thick? Or vibe? Man, more warmth and heart and soul than I've ever heard - these are the FEEL GOOD VIBES. They fill the room and soak your soul. Its like being drenched from all sides in warm, soft water. Or feathers. Or beautiful women. Or something. You know what I mean - its that full warm soulful vibe, there's nothing like it. This amp immediately feels like a beloved old friend.

Thanks a million times over and congratulations. This is, very very easily, the best thing I have ever purchased in my entire life. I have no doubt that I will play this amp, and this amp only, as long as I'm playing guitar. It has made me very, very happy. That's such an understatement. I even love it with my Theremin! It's never sounded so ethereal!

Thanks for your uncompromising drive to produce the most toneful amp available. Thank you SO much. This is just incredible.

Thanks for the particular NOS recommendations! I did get a NOS 5Y3 made by RCA and I am going to put that in my AST today along with a NOS RCA blackplate 12ax7. I didn't think about trying the 5Y3 in the little 6v6se and I will consider that for the future...I can't wait to hear the AST with these changes. I have put NOS tubes in many of my amps but the Swarts have sounded so good with the stock tubes that I am just now beginning to go that route.

I really love my Swart amps and they really do have a voice that's tonally unique. The AST seems to capture and blend the best of Blackface and Tweed Fender sounds and tie them all up in a distinctive sonic bow that goes way beyond being a clone of any particular vintage amp. I feel like the AST and the little beast that is the 6V6se are like new vintage amps that inspire any musician to bridge the past and future of guitar sounds.

I like Stu Carter's description of the fairy dust that seems to be sprinkled over any chord allowed to linger in any space lucky enough to have a Swart there. I often turn up the tremolo and reverb, play some jazzy chords and just let the last one ring out, linger and fade while I stare at the amp with a stupid grin on my face...

I also love the Greg V clips of all your amps and those new clips of the STR are really great as well. I already have a few of these amps and I still find myself listening to the clips on a fairly regular basis! I am seeing a trip to Fat Sound in my near future to check out that newest Swart.

I have been a Swart fanatic for a few years now and I am most definitely a fan for life.

ADDENDUM
Kelly, I put in that NOS 5Y3 and it was an incredible difference to my ears. I think there should be some kind of tip somewhere on the site about how changing the rectifier to a 5Y3 unleashes the great tweedy beast within the AST and allows you to hear it at lower volumes... WOW, what a difference! I love what it does to the whole sound! It sounds great with the GZ34 as well, but for my purposes, the 5Y3 is an amazing tonal option that really opens up a different side of the amp. For anyone playing at home and wanting to get that glorious overdriven AST sound, this brings it front and center at a more reasonable volume. Highly recommended!!! - Eric

Hi – I bought one of your Space Tone Reverbs about a month or so ago – I think it’s finally broken in – all of a sudden it’s as sweet as a nut!

Let me know what’s happening via the newsletter.

Keep them amps coming. At this rate I’ll be homeless, but with the best amp collection on the streets.

Picked up my Space Tone 6V6se a couple of days ago, what a beautiful instrument! Truly inspirational to play thru. I could not be more happy and I will spread the Swart gospel wherever I go.

Thank you so much for building such a wonderful amplifier, it is truly a marriage of craftsmanship and art.